Skip to content
The St. Louis County Fair and Air Show was our destination yesterday afternoon.  It was a gorgeous day with temperatures in the mid-80’s and nothing but blue sky.  Aside from Hale becoming a heat casualty, the day turned out to be ok.  I don’t look forward to going back to this event next year because of the crowds and traffic.  However, the Blue Angels did not disappoint.  It was simply awesome.
It was fairly difficult to get pictures.  For one the sun was right above the flight line.  Secondly, there were a couple of people with BIG heads standing in my way – it was way too crowded.  Third, I was standing too close and the planes were way too fast.  But I managed to get a couple of screen savers out of nearly 400 pictures that I took.  Here’s a couple of shots and as usual I’ve posted the unedited pictures on Flickr (link below): 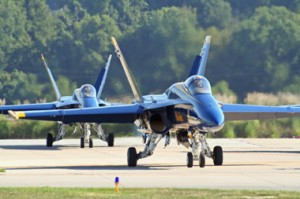 To see more, check out the really big files (broadband recommended) on my Flickr page.