A couple of months I ago I tripped across a pizza place online that looked kind of hip.  It reminded me of Dewey’s without the kid appeal so I ventured down.  It was good stuff.  No kids.  Full bar.  Beer selection could have been better, but no complaints.  Great pizza!  Then I noticed the owner had several concept restaurants around Richmond and one of them was a BBQ place.

I immediately checked out Q Barbecue’s web site and marked it down on a list of places to explore when I had some time.  Heck, it brought back great memories of visiting a good portion of St. Louis’ BBQ joints when moving out in 2007.  Why not hit it and see what these guys have?

I finally had the opportunity yesterday… 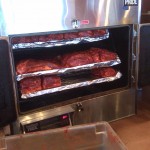 Let’s start with the positives.  These guys are sure proud of their food, evident by their actions and words.  From the cook loading the “cooker”, the cashier taking the order, bringing out the food, to the person wiping up the tables – these employees look happy.  The store is absolutely clean in every aspect; clean décor, polished stainless steel kitchen, mirror like windows.  There are trophies on display!  They have a cool logo and a huge t-shirt collection.

I read something about BBQ not long ago.  I recall the quote was about making BBQ a business.  The point was as soon as you make BBQ a business it goes all wrong.  Q Barbecue might want to do some light reading along these lines.  And actually I couldn’t help but think of the late Bill Hicks’ view points on marketing.  Q Barbecue plays the marketing whore role very well.

Richmond, if you think this is the best BBQ you’ve ever had move to St. Louis.  They love vacuums there.  In fact, it’s insane to make that claim on a web site and ask your web site visitors to finish a line: “Barbecue so good that…” you could ring enough water out of the pulled pork to grow corn in the Sahara.  There’s my submission.

I ordered a two meat combo with one side item and tea (of course the tea).   The cost was somewhere in the neighborhood of $15.  I received a healthy portion of pulled pork and about 4 ribs.  The baby back ribs were prepared and served St. Louis style (oh the irony).  My side item was greens and the plate also had a small bun.  No doubt a good portion of my cash went to the t-shirt display.

I asked the gentleman a couple of questions when ordering.  About the greens he said they were a combination of collard and turnip greens cooked with apple juice, bacon, onion, and some sugar.  On the wood, it was hickory.

The cooking process is an all night affair.  Seems Q likes to start their fire and place the meat in the “cooker” (stainless steel smokers inside the restaurant).  They bring the rig up to temp and leave it to cook overnight.  The meats are then prepped for the day’s business the next morning.

The greens certainly were unique.  I’ve never had greens so sweet.  In fact they were too sweet.  Greens should be a little bitter so a person can taste the onion, bacon, vinegar, and the greens.    It’s almost like the sugar is added to trick kids into eating them.  Weird… The meat fell off the ribs.  There wasn’t any labor involved in eating them.  Some would say this is an indication of overcooking and I believe it is in this case.  Some parts of the ribs, namely the outer bark were tough and chewy.  The ribs were not dry but the texture indicated moisture was added after cooking.

I gave away my thoughts on the pulled pork already.  There’s nothing I hate more than pulled pork that has sat in a steam pan all day.  It’s dog gone pig abuse in my opinion.  The meat looked like it was near perfection at the point of pulling: deep red ring, nice bark, pulled not chopped.  The water however had begun to break down the meat to the point where it had lost a good bit of its flavor.

I tried all four sauces Q had on the table for its patrons: a North Carolina vinegar sauce, original red, sweet red, and a spicy red.  The original was the better of the red sauces.  I prefer a vinegar sauce myself and used that over most of the pulled pork.  It added some flavor back to the meat.

All-in-all my write up here may seem unfair.  In truth, the marketing whore in me appreciates the slick branding.  The BBQ purist in me says to let the food speak first.  Most BBQ nuts know competition BBQ and good-eatin’ BBQ are two different animals.  I would question the Q story given my experience in the store.  Are the trophies there to support a value proposition?  Or did the passion and way of the BBQ life come first?  Judge for yourself.

I’m positive the BBQ right out of the smoker at Q is darn good BBQ.  I would be first in line for their Q at a festival.  I really think Q’s biggest opportunity is to shut down the fancy store and find a location that allows it to scale down and turn over traffic.  Pappy’s Smokehouse in St. Louis is a good example of this.  They only sell what they cook for the day and once it’s gone the store closes.  Lines at Pappy’s often stretch a block or two.

So now to the Butts…

We rate Q Barbecue in Richmond 2.5 out of 4 Butts.  The marketing doing the talking is too overwhelming.  It may fool the common Richmonder, but not a kid from North Alabama.